Can album covers be saved?


No other book has made me laugh more than Horrifically Bad Album Covers by Nick DiFonzo. Each page shows an absurd, hard-to-believe-it-exists cover: "Music to Paint By," "The Ethel Merman Disco Album," "Let Me Tell You About My Operation." The photos are even funnier than the titles. What were they thinking? Did the vinyl fumes damage the producers' (and artists') brains? 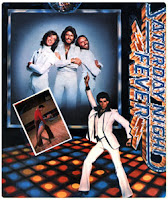 In my never-ending mission to find new ways to use old stuff, I see the thousands of albums at my local St. Vincent De Paul's and wonder if they can be redeemed. One idea is to transform them into covers for blank books.

I started with the iconicSaturday Night Fever soundtrack. I remember when I was 16, getting this album for my birthday. I was in heaven! It was the first R-rated movie my parents let me see and of course the music defined that (now disparaged) era.

But would somebody today want a blank journal infused with the spirits of John Travolta and the Bee Gees? Many of us end-of-the-baby-boomer babies may remember our disco days fondly, but we wouldn't want anyone else to know about it.  Happily, at a late summer craft fair, I did sell the book. The buyer looked happy but a little embarrassed. Here's the final product: 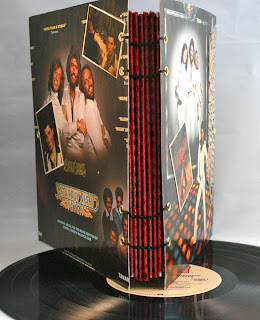 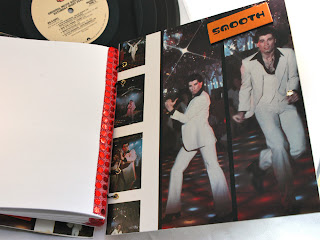 I considered choosing a Beatles album instead. But cutting it up might be seen by Beatles zealots as blasphemy. And I can only imagine the strange looks I'd get if I made "Let Me Tell You About My Operation" into a blank book.
album cover book disco upcycle