What to do with dominoes?

In my pursuit of items to repurpose and upcycle into cool stuff, I've acquired lots of dominoes from local thrift stores -- black ones, wooden ones, large ceramic ones, and smaller ones with Dora the Explorer. I've made a few pendants, but I'm not overly impressed by them. (The one on the left is an example.) 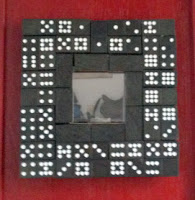 But what to do with the many (perhaps hundreds) of dominoes I've got in my stashed? Should I bag them up and try to sell them to fellow crafters on Etsy? I've made a frame for a mirror out of dominoes.

I've also cut up a photo and placed each piece on a separate domino to make a 3-dimensional mosaic. (Lots of work, especially if you mix up the photo snippets!)

But I'm thinking there may be better ways to use my dominoes. (I could learn how to play the game, I suppose!) Any suggestions out there? 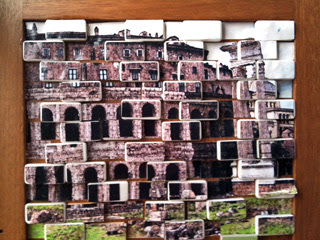 UPDATE: I tried one more experiment with dominoes: bracelets! Here's how I made them.
domino mirror mosaic resin upcycle