In a previous post, I described my first attempts at crafting a cover for my dad's new Kindle Fire out of a recycled plaid shirt. While I was waiting for feedback from my test users (mom and dad), I couldn't resist making a third version.


I reversed the fabric so that the plaid became the lining and old jeans served as the outside cover. I added a pocket from another denim item -- kids' overalls -- along with one of the shoulder straps. I constructed it so that the lining would peek out from the top and match the pocket detail I added. I used the same pattern for this bag as the first version.

When I finally heard from my folks, I realized I should have waited. The feedback came back loud and clear -- my first pattern was too small! Even though I'd used the specs published by Amazon, the bag was too snug for the Kindle to easily slide in and out. Also, the squared bottom was unnecessary and added too much bulk. 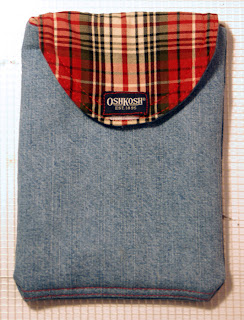 I revised my pattern by adding 1/2" on each side and simplifying the bottom. I also decided to keep the denim on the outside and plaid on the inside. Could I even make it reversible? I decided to try. Here's the next version.

I used a different pair of jeans, which were more faded. I added red top-stitching and flipped the flap so that the plaid was on the outside.

Making the bag reversible seemed, at first, easy. But there was one challenge -- how to make the velcro fastener work on both sides of the flap without showing? I took the "Osh Kosh" label off the kids' overalls (from version 3.0) and attached velcro -- voila! 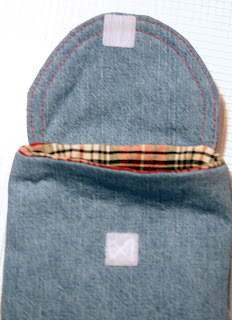 I sent this version back to my dad, and the response was clear -- it was perfect! At least for the older more conservative Kindle user. Now I will take the pattern and try jazzing it up by using more colorful patterns and designs.