Secret of the upcycled book -- Hardy Boys are hardly bad 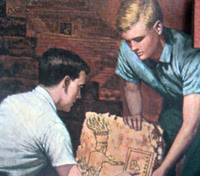 The repurposed book-style Kindle cases that sell best in my Etsy shop are those made from old Nancy Drew and Hardy Boys books. Especially editions from the 1960s and earlier.

But I have a dark secret.

I've read only one Nancy Drew book -- Secret of the Old Clock, the very first one. My brunette pre-teen self just couldn't identify with the perky blonde detective.
And until a few weeks ago, I'd never ever read a Hardy Boys story. Not surprising -- why would a Northwest grunge-hearted girl want to read about 2 clean-cut, prepped out brothers solving crimes in the Northeast?

That all changed when I spent a week with 9-year-old Sean and his mom, my best friend from high school. Sean loves scary books. When we visited his local library, a young girl recommended While the Clock Ticks. It's the scariest of all the Hardy Boy Books, at least according to her. (Another mystery involving clocks? Really?)
That night, we began the story -- Sean reading one page aloud, then his mom, then me. I knew the names of the main characters -- Frank and Joe Hardy. Pretty white-bread, but nothing compared to their friends' names -- "Biff" and "Chip." I had to stifle a laugh.
The story was serpentine. Lots of characters to keep track of (almost all boys and men), creepy settings (an uninhabited mansion with a secret room),stolen treasure (a jade chess set). And, of course, fast cars and beached boats.

But we were hooked. There's nothing like a nightly ritual. We laughed at the stilted language (one character "seethed in chagrin"). Sean learned about lots of old-fashioned technology (and had to listen to his mom and me reminisce). Maybe most important, the mystery did keep us guessing. Not bad for a 40+ year old story.
So I wondered -- should I stop de-constructing (ok, destroying) used Hardy Boys books, now that I can see the stories themselves aren't so bad? Even entertaining and relevant to 21st century kids? Nah. But I appreciate them more, and maybe I'll read some of the stories before I rip them apart.

Perhaps it will be the next Hardy Boys mystery -- Secret of the Upcycled Book.
book childhood children Kindle kitsch mid-century nostalgia repurposed book