Turn an old hardback book into a traveling art case 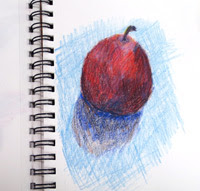 To get in the habit of sketching more often, I've started taking a sketchpad and set of colored pencils with me when I travel. To keep everything together, I made a carrying case for my supplies out of an old hardback book.

The book I chose was an oversize kids' hardback, Alfred Hitchcock's Daring Detectives. 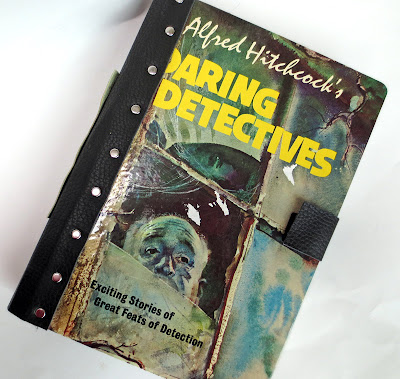 I chose this book cover for a couple of reasons:

After removing the damaged spine and pages, I created a new binding out of some faux leather upholstery samples from my stash. After I covered the raw edges of the covers with yellow duck tape, I attached the strip using 2 long lines of small double-cap rivets. 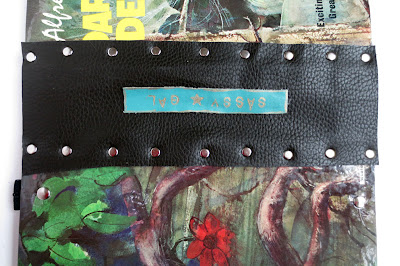 The first and last rivets on each row are the most important -- they keep the fabric from flapping and make the covers more stable. (I found the "Sassy Girl" label in my "save for collage" bin. Too bad I put it on upside-down!)

Elastic to hold the sketchpad

I make my own upcycled sketchpads, but I wanted this case to hold standard-sized pads so I could swap them out easily. I attached a wide elastic band to the inside back cover using more rivets. 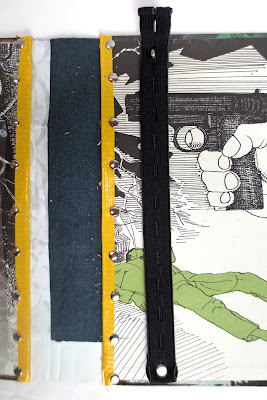 The elastic came from the casing of a skirt used for another project. It had several slots on one end, so I could try different lengths before securing the rivets. The back cover of the sketchpad slips easily through the elastic and stays in place securely.

This was the hardest part of the project -- figuring out how to make a container for my colored pencils. It had to be:
I searched my stash for potential pencil holders. A plastic bag? Not durable. More elastic? Not secure. A fabric pouch? Too hard to attach to the case.

Remarkably, the solution was hiding in my office. Do you know what this is? 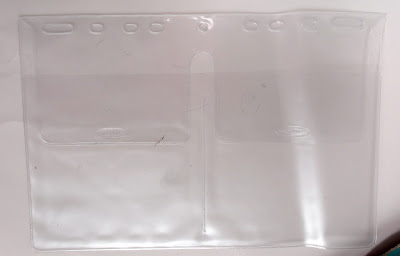 I could be wrong, but I think it's a plastic holder for 5 1/4" floppy diskettes -- what computers used a long, long time ago for external storage. Before read/write DVDS or CDs or USB sticks or even small hard floppy disks. I used them back in the day, so it's possible I'd have saved these holders.

I cut the pouch in two. Then I added small velcro squares to the back and the flap (the kind with adhesive backing.) I'd finally found a use for the velcro that has bedeviled me for so long! 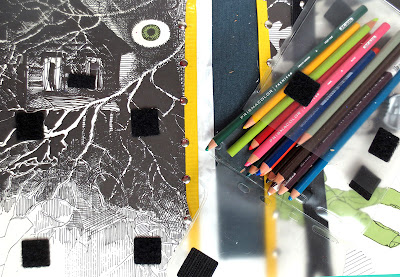 I stuck 4 squares on the inside front cover, their positions matching the squares on the bag. They hold the bag in place but enable me to remove it quickly when I want. 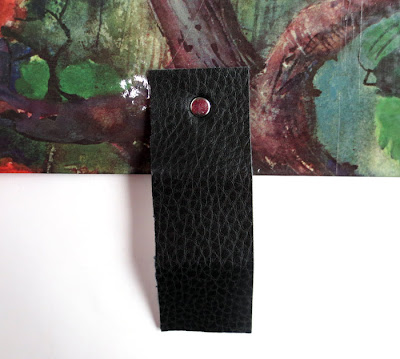 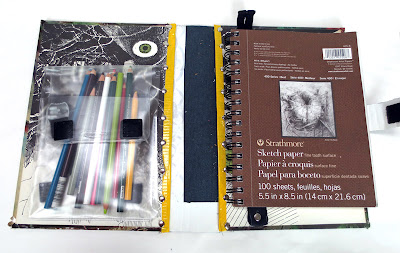 To test it out, I took it with me to Chicago, where I was visiting a good friend. It went in my carry-on bag, but I wasn't brave enough to fish it out and start sketching at the airport or in the air. Too many watchful eyes.

But when I reached my friend's house, I discovered her 9-year-old son loved to draw as well. He liked my case so much, he made one of his own out of an old cookbook and a ziplog bag. In fact, he was smart enough to choose a white book cover, which he quickly covered with doodles and drawings.

The other thing I might add is a handle. But where? Another upcycler, whose art case first inspired me, used hard handles from an old suitcase. But they would make the case bulky and harder to pack. Stay tuned for art case 2.0.
art blank books book children computer diy how-to instructions repurposed book sketchbook upholstery velcro