Warning -- old cookbook photos may be hazardous to your appetite 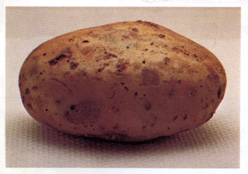 This is your potato in a microwave. 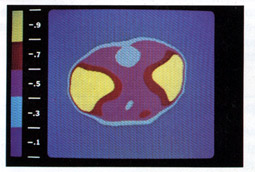 I love old cookbooks. They tell us how people cooked and ate and partied in the past. What I like best are the photos -- professionally taken but horribly unappetizing. That's what I discovered when I opened the Guide to Microwave Cooking & Recipe Book, published in 1977 by JC Penney. 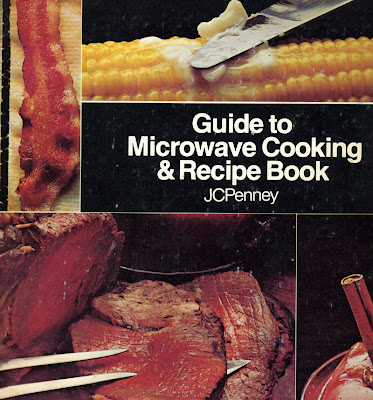 Do you remember your family's first microwave? I do. It scared me. All-metal, it looked more like a medical device than an oven. I was certain radioactive waves were shooting out of it, aimed directly at me and my growing pituitary gland. (Hmm, maybe that's why I'm so short.)
Other people must have shared my fears -- that's probably why Penney's published this guide. Here's their resident microwave expert, Diana.
She introduces the book:


"This unusual, new book is both a guide and a cookbook. It grew out of nationwide cooking schools and extensive customer research, from which we learned what people need to know to become confident, successful and expert microwave cooks."

Unusual for sure. An illustration produced by "thermography" shows exactly why you should be frightened of your new $1000 appliance.
Most foods love to be microwaved. But a few stubborn items refuse to get with the new technology. Like these.
This book was ahead of its time in another way. It truly is a visual guide. Thousands of color photos show food before, during and after microwaving. Which is unfortunate, because much of it looks unappetizing.

Part of the problem is that our Diana must have been a bit compulsive. Obsessive. Okay, OCD. She took her time -- too much of it -- meticulously arranging each and every food item. These beef balls form a perfect circle. Perfect!
This is probably the most disturbing photo spread in the whole 271-page book.

These were taken immediately after microwaving. Imagine what these patties looked like a few hours or days later!

I plan on turning the book cover into a case for a large tablet. Someone, I hope, will share my love of kitschy food photos and appreciate the irony of pairing 1970s high-tech with a 2013 iPad.

But what to do with the images themselves? Ugly notecards? Strange collages? I don't know. But in the meantime, I've posted some of my favorite photos here for your enjoyment.
cookbook food history kitsch photos repurposed book