How a mixed-media collage unleashed my subconscious 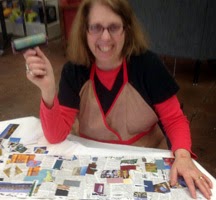 This weekend, my husband and I took a 2-day workshop called "Mixed-Media Recycled Triptych." I wasn't sure what to expect. I liked the sound of those first 3 words, but the tzarist overtones of "triptych" scared me.

The instructor was John Arbuckle. I follow John's blog, but I'd never met him before. His collages are full of symbolism and narrative, so I wondered if we'd be delving into our subconscious.


I imagined a dark, tortured soul, but John turned out to be the opposite. He is full of joy, enthusiasm and -- best of all -- an incredible talent for sharing his artistic expertise. I can honestly say this was one of the best art classes I've taken. 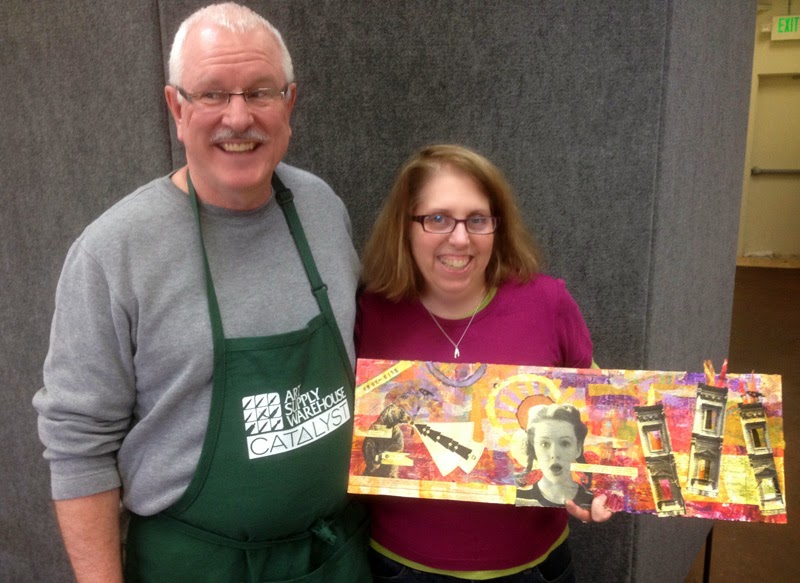 Usually I save the best for last in my posts, but I wanted to show the finished collage first, then tell you how I made it. Ta da! It's called "Shur-Kill." Later I'll tell you why.

John provided us with every single thing we could possibly add to a collage. Everything! For the triptych base, he gave each of us a tri-fold cardboard brochure, the kind you get at a hardware store.  It was covered with small paint chips. We started by adding a layer of paper and photos.

Then we slathered on a coat of white gesso. Talk about an exercise in non-attachment! To add texture, we used rollers stamped with an abstract design. 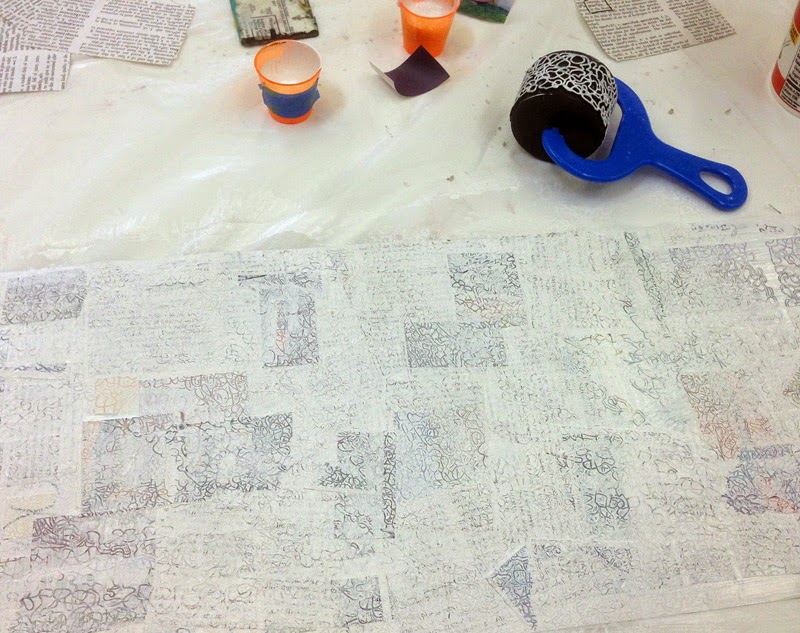 Next came the paint. I chose red, purple and orange. We applied it with a stiff credit-card. To say it was fun is a huge understatement. Who needs brushes? I love the lines created by the card edge.

Strips of tissue paper came next for more texture and visual interest. To finish the background layer, we made a horizon line using stamps. In my collage below, this is the dark red band running across the bottom third of the piece.

Up to this point, I had no idea what my collage was about. John had guided us through each step of building the background. Now he set us loose to find images for the middle and foreground layers. Through these images, my collage would tell its story.

I found my central image -- the surprised face of a young girl. John dubbed her "Pippi Longstocking." What's she reacting to? The answer would be in the other 2 panels of my triptych. 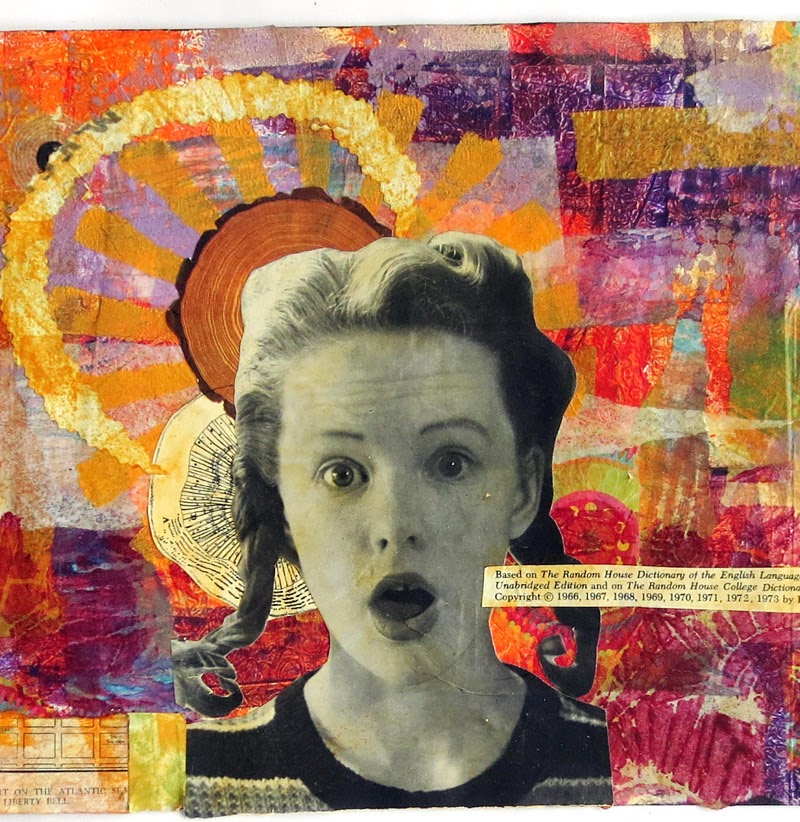 I thumbed through piles of magazines and book pages, cutting out images that spoke to me. Then I "auditioned" each one (John's useful term), to see what arrangement looked right.

To Pippi's left, I placed a bear with a large megaphone. Pretty surprising, right? 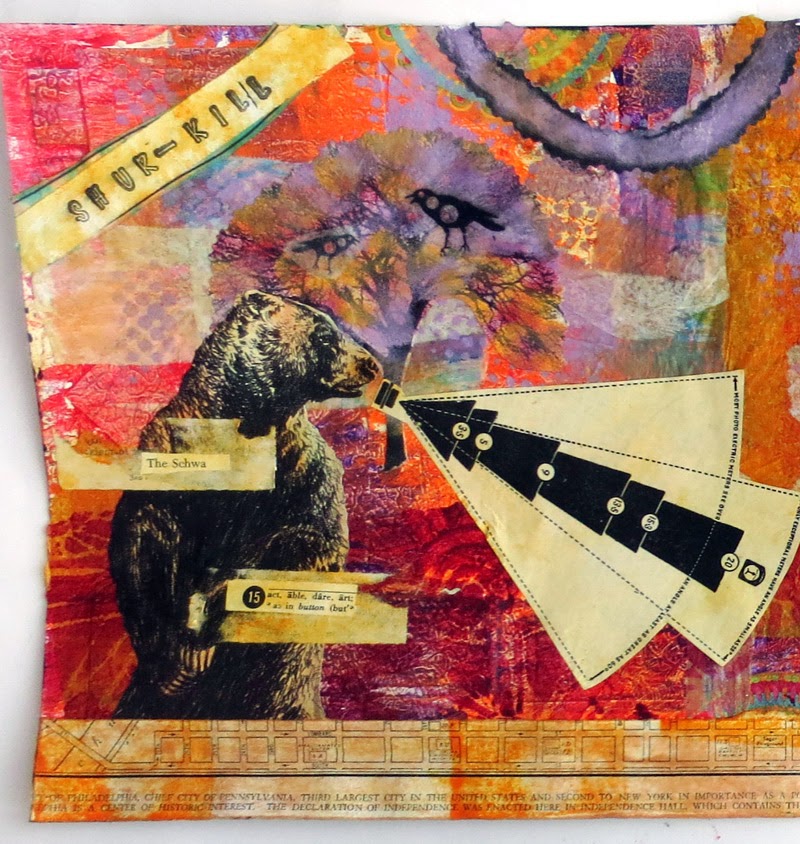 The image to her right was more menacing. I cut apart the facade of an old building and tilted each column. Then I added flames to the top. Fly away, little bird! 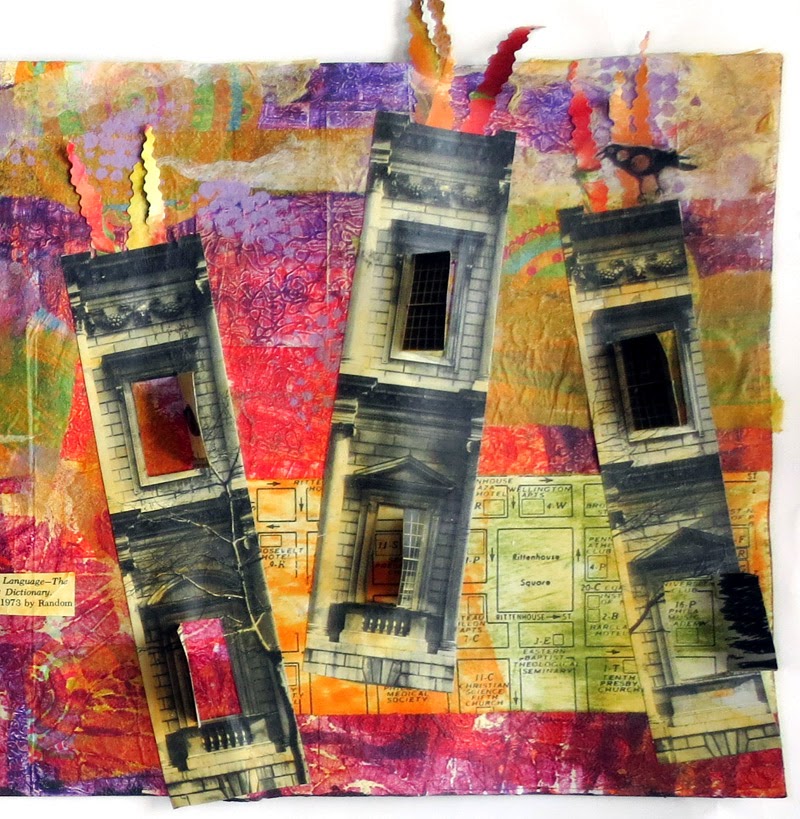 What awful thing had I dredged up from my subconscious? There's a clue in the map behind the fiery columns. It says "Rittenhouse Square," which is a landmark in downtown Philadelphia. Or as the locals call it, Center City.

In the mid-80s I left the laid-back Northwest to attend grad school in Philly. This collage portrays the shock I felt when I arrived.  Not long after I moved there, city police bombed a neighborhood a few miles away from my apartment. 60 homes were destroyed and several people killed. I wasn't in Kansas--er, Oregon--anymore.

I added the word "Shur-Kill" to the upper left corner of my collage. Flying into Philly that first time, the passenger next to me pointed to the river running through the city, the Schuylkill. He said the road next to it was called the "Shur Kill Expressway" because of all the accidents. A scary, but as it turned out apt, introduction to my new home.
I left the workshop with new skills and knowledge, including a much better understanding of how to build up layers in a collage. Oh, and my subconscious feels a bit lighter. Thank you, John!
art collage creative process creativity learning Philadelphia process skills texture