Want to hear a story from 1959? It's about what happens when a typical American family faces a terrible challenge. It's called "Men Are So Helpless."

It comes from a high school textbook called Teen-Age Tales, and is part of the section "Faced with a Problem." Wonder what the problem confronts the couple below? It must involve that striped blazer! 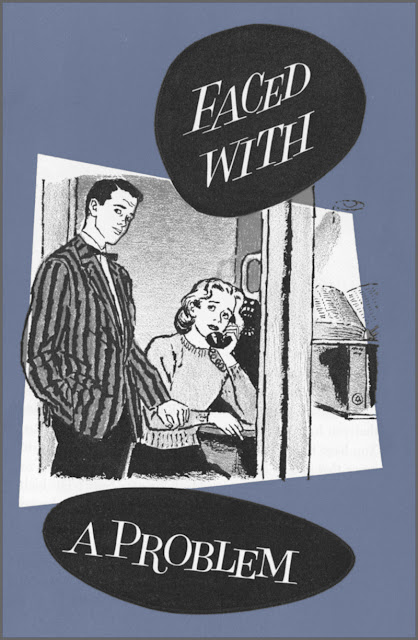 Why should the typical teen care? The book explains:

"As a teen-ager, you like to be on your own. You like to make up your mind for yourself. You want to face your own problems. Sometimes you like to help others with theirs...All this is part of growing up. But it is not easy...You have to prove that you no longer think and act like a child." 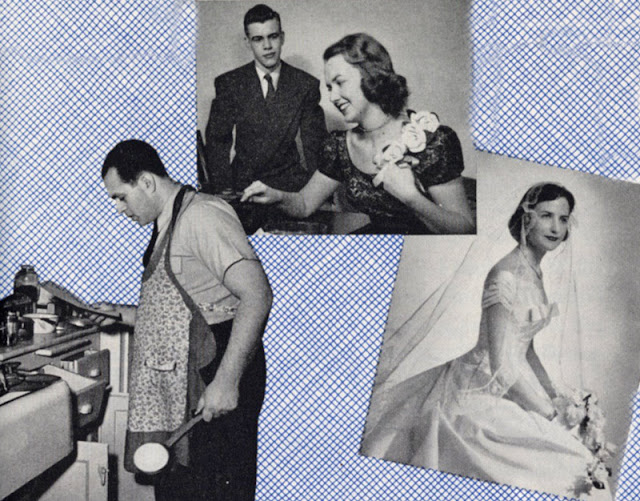 Our story begins just before Easter when "Mamma" gets a telegram from her sister who is "awful sick."

"For a couple of days Mamma went around the house looking kind of sad. The way Mamma acted got finally got on Papa's nerves. One night he got mad and shouted, 'Go see Sally in Pittsburgh! What's the matter? Do you think we can't afford it or something?'"

Isn't he thoughtful? But Mamma isn't worried about money. She tells Papa, "You know I can't leave for that long. Who would cook and clean and everything?" 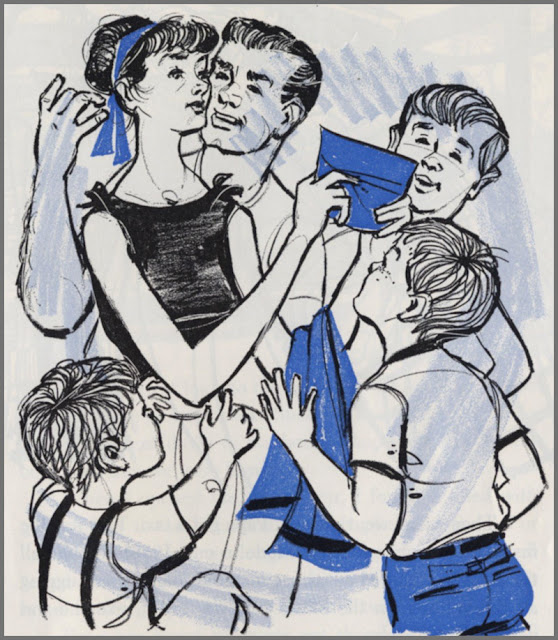 But Papa convinces Mama that he and their two boys will be fine. Before leaving, "Papa couldn't eat anything. Mamma kept telling him what to do while she was gone." Typical.

After she was gone, Papa took off for the "barber shop." (yeah, right) Herman, the older son, raided the refrigerator.  "For lunch we had 14 doughnuts and ginger ale. Boy was it tasted good!" If Mamma only knew!

The food lasted for a few days. But then, "things looked pretty bad." So the boys head to the grocery store. They didn't know what to buy. The grocer introduced them to frozen dinners.

"All you have to do is warm them up. Boy that was something. We ate frozen steak, French fries, pork chops...the one trouble was that they had frozen vegetables too." 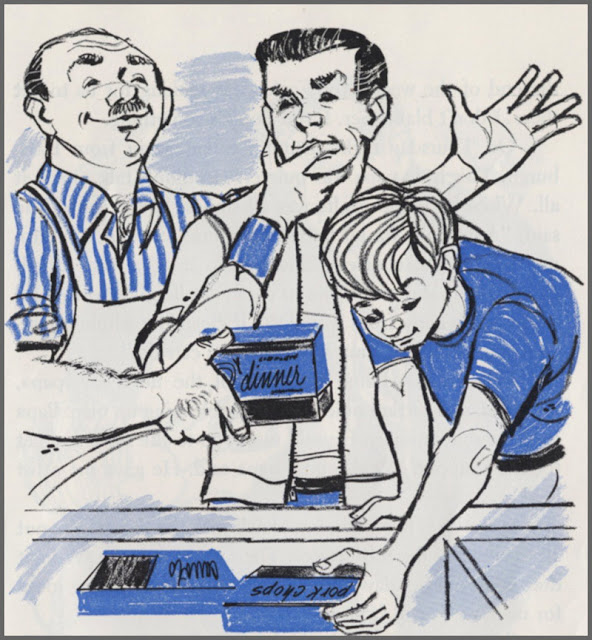 After their first frozen meal, Papa was feeling pretty smug. "See how easy it is to keep house? Mama works and works...All you gotta do is light a stove."

The boys continue to enjoy frozen dinners, served on paper plates, until the night before Mama's return. Then it was time to buy "real food" and clean up the place. Papa's smugness grows.

"Papa started to smoke a cigar. He looked pretty pleased with himself. 'I guess we can be pretty proud. Looks like we can get along without Mamma. Boy won't she ---"

'Yeah, but who wants to get along without Mamma?' asks little brother Louie.

Papa swung at him and missed. Little Louie ducked. 'Shut up,' Papa said. 'I didn't say we wanted to get along without Mamma.' " 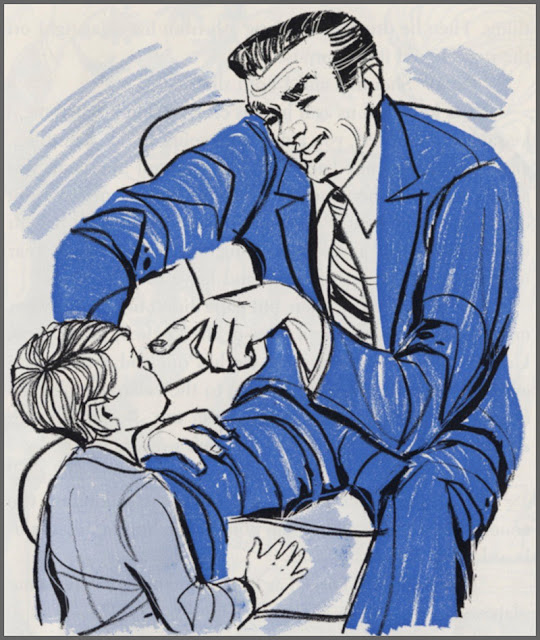 "Now listen you kids, we're going to do something, and I don't want any back talk. Herman and Sherman, you go out in the kitchen and dirty dishes...When you've made a mess of the kitchen, go upstairs. Unmake the beds. Take some clothes and throw them around."


"Little Louie, you go down to the cellar. Get all the cigarette buts you can out of the ash can. Bring them up and fill up the ash trays." 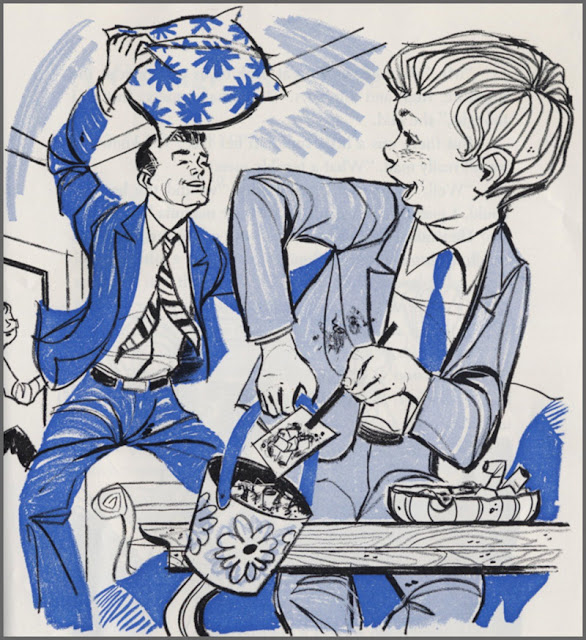 The boys get the house looking terrible.


"Little Louie had gotten ashes all over his Sunday suit. I thought Papa would belt him one. But Papa just grinned at him."

Mama returns. "My, what a mess! Just as I thought." But there was a little smile on her face. 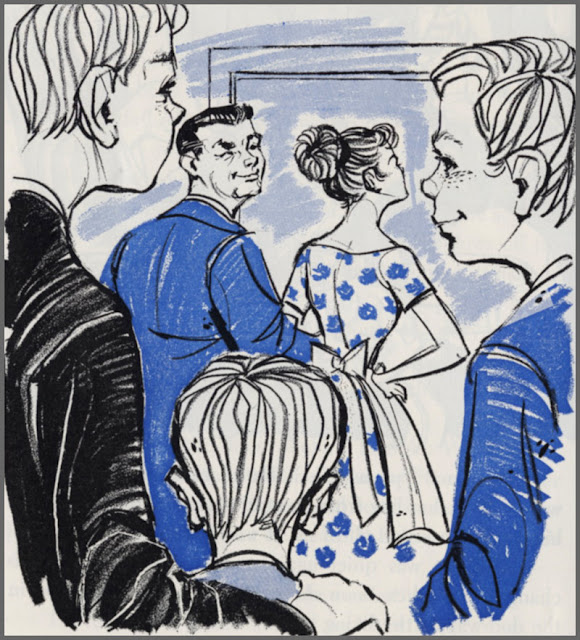 Papa's wink says it all. Women want men to be helpless around the house. And men are happy to oblige.

This is what teenagers were learning at school in 1959. Thank goodness for the 60s!

BTW, I made a tablet case out of the cover to this vintage book, available here.